5 Cuts to a "Perfect" Cross-Cut Sled 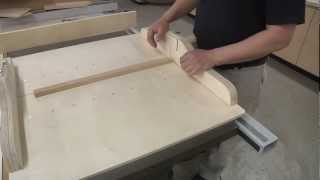 The cross cut sled is probably the most important jig in your shop. Here, William will explain the theory and calculations to enable anyone to get a sled dead on square. He will show his tips and techniques for constructing the sled.

Formula for calculating Error: (A-B) ÷ 4 ÷ Length of 5th cut x Distance between pivot point and the point of adjustment = Error