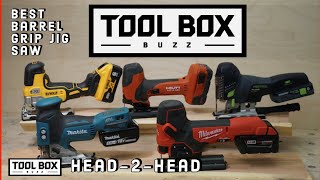 For this evaluation, several categories were developed including; Precision & Accuracy, Performance (speed/power), Features, Ergonomics, and Price.
Each of the categories was ranked individually and used to determine the Best Barrel Grip Jigsaw based on the combined results.
Accuracy
For the accuracy category each of the jigsaws was ranked on accuracy in the following areas:
• Line of Sight
• Blade tracking
• Bevel accuracy when set to 45 degrees.
• Cross-cut accuracy when set to 90 degrees (how perpendicular the cut is to the surface)
Line of Sight
For the scroll cutting each saw was set to maximum speed with zero orbital action. A scrolling template was used to trace all the boards consistently, and each jigsaw was used to make numerous cuts in 3/4′” Poplar.
The DEWALT and Makita both had excellent cut line visibility, and the Makita was the best performing saw on the scroll cuts.
The Milwaukee cut line visibility was good but not great and the Hilti dust shroud got in the way of the line of sight so we removed it. We all agreed that if we owned this saw the Hilti shroud would stay off.
The Festool saw blade was difficult to see. The small-sized Diablo blade got lost [visually] inside the V-shaped blade guard.
When cutting bevels the DEWALT saw had the best bevel sightline. Makita sightlines were slightly obscured, and Festool and Milwaukee had terrible sightlines. The Hilti sightline was good, but the LED light was blocked when set to a bevel.
Clean Cutting
Getting clean jigsaw cuts with only light splintering, tear out, and surface chipping is chiefly a matter of selecting a blade that’s designed for the job.
The DEWALT, Hilti, and Makita produced the cleanest edge, cutting saws with the least tear-out. This “clean-cut result,” was also due to using the same Diablo blades along with the operator’s skill set using the tools.
The Festool and Milwaukee surprised us with rougher cuts
Blade Deflection
Every cut was measured and evaluated for blade deflection at 45-degree and 90-degree cutting. On the 90-degree cuts, Milwaukee ranked the best, followed by Makita and Festool.
On the 45-degree cuts, the Makita ranked the best, followed by the Festool, and Milwaukee.
Blade Tracking
Tracking was evaluated by following lines to see how easy or hard it was to follow the line. The Makita, Festool, and DEWALT were the best tracking jigsaws.
It’s worth noting that when scoring the line-of-sight, points were awarded based on the operator’s ability to consistently see the blade cutting through the poplar. Points were not awarded based on the cut-line deviation from the template cut-line. This ensured that operator error was minimized as a primary scoring factor in this evaluation area.
Accuracy Winner – MAKITA
Makita scored tops in three out of the four categories [clean cuts, tracking, and 45-degree blade deflection] and came in second 90-degree blade deflection. It scored a near-perfect score of 5-points and is truly a nice cutting, accurate jigsaw.
Performance Testing (Power/Speed)
The sled fixture held the saws securely and the aluminum tracks kept the saw moving in a consistent and parallel fashion. The saws were in contact with the sled and the sled in contact with the workpiece.
Performance Testing (Power/Speed) – Winner Milwaukee
We rank the performance testing by normalizing Watt-hours. Milwaukee came in on top followed by Hilti and Festool. When watching this test all of the crew members commented on Milwaukee’s speed, which equates to power.
Features – Winner DEWALT
The DEWALT saw scored top in four feature categories 2nd in one category and 3rd in two categories with a total score of 12-points. A real close second place went to Makita with 13-points with 1st or 2nd place scores in every category. Third place went to Milwaukee with 14-points.
Ergonomics Winner – Hilti and Makita
Hilti and Makita tied in ergonomics with 6-points, which was four points ahead of the Festool and 7-points ahead of the DEWALT. Hilti had the best grip, tied on the blade change, and was the most friendly tolefties. Makita had the best and safest trigger and tied for the best blade change.
Vibration – Winner Festool

Best Cordless Jigsaw Winner –Festool and Makita
The best barrel grip jigsaw score was a tie and went to the Festool and Makita with 12-points. Festool earned strong scores in Speed / Power Normalization, Vibration, and Scroll Cutting / Tracking. It is a highly engineered, well-made tool.
Makita had strong showings in Ergonomics, Features, and Scroll Cutting / Tracking.During this testing, there were two saws that the crew kept talking about as being the nicest to operate and use – Makita and Hilti in that order. Makita being the crew favorite.