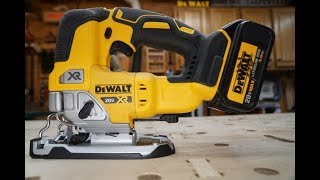 We’ve had some time to use D-handle Jig Saw on our jobsites and here’s what is new:

DEWALT redesigned this newer model which is smaller, lighter [4.6lbs], faster, has a lowered motor position, and improved the blade clamp.

The older model had been designed to accept both U-shank and T-shank blades. The problem with that model is that it did not hold the U-shank blades well, causing user frustration. U-shank blades, in our opinion, tend to wobble, flex more, and produce more tear-out than T-shank blades.

The new DEWALT DCS334 XR Jig Saw has a more reliable and durable blade clamp. DEWALT reworked the entire mechanism and actually reduced the number of parts in it. The result is a well-designed secure blade clamp with a better designed release lever. The blade clamp does NOT eject the blade.

Having a variable speed dial, results in freeing up focus on trigger/ blade speed and allows the users to focus fully on maneuvering the saw through the cut. The obvious win here is that it’s easier to operate for more precise a cuts.

The DEWALT DCS334 XR Jig Saw was redesigned with a brushless motor that operates quieter, and sits lower to the work surface giving the user more control. The older model was taller, and noisier. The barbell grip saw will provided even more control.

After using both saws it’s obvious to us, that the new model is more powerful and much smoother to operate.

To minimize blade deflection and improve accuracy, DEWALT lowered the position of the saw bearing, wheel-retainer, which helps stiffen the blade. Additionally, the groove in the bearing wheel is deeper, so the blade indexes better and stays in place.

I often find that a jigsaw’s quality can be summed up pretty fast if you try to cut a 45-degree bevel on a piece of 3/4″ plywood. If you can cut that bevel in a nice straight line without fighting the jigsaw than you’ve got a winning combination. This jigsaw had no problem cutting nice straight 45-degree bevel cuts over long lengths.

We tested the jigsaw in Mahogany, Pine, Maple and plywood. The saw cuts well in all of those materials, and tracks well. We made straight, 45 degree and scroll cuts and checked for square and parallels. We also did see some moderate, and aggressive scroll cutting in hard Maple. On this test we did see some moderate deflection.

All jigsaws employ some sort of counterbalance system to reduce the up-and-down shaking created by the reciprocating plunger and blade. DEWALT updated this saws counter balance system and its noticeable.

The older saw had a longer Scotch Yoke reciprocating motion mechanism which resulted in more vibration. A Scotch Yoke converts the linear motion of a slider into rotational motion. (or visa-versa) resulting in the vertical blade movement.