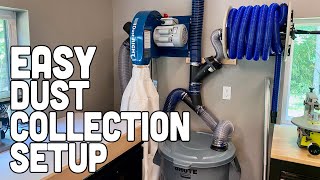 I have been needing to install a decent dust collection system for some time now and finally got around to it. There are many different levels of dust collection but I have a medium sized shop and wanted to create a flexible and easy system to use and install. I opted to go with a Dust Right unit from Rockler because it is a great fit for my shop and they have tons of components to go with it.