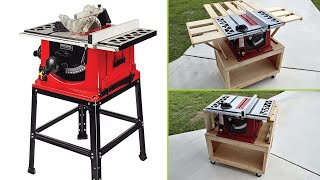 This 𝐭𝐚𝐛𝐥𝐞 𝐬𝐚𝐰 𝐬𝐭𝐚𝐧𝐝 𝐰𝐢𝐭𝐡 𝐟𝐨𝐥𝐝𝐢𝐧𝐠 𝐨𝐮𝐭𝐟𝐞𝐞𝐝, table extension wings, storage, dust collection, and folding outfeed is what you may consider part two to the last video I did for my General International table saw. The design goal was to have something compact that did not take too much space in my woodworking garage workspace, and I decided to step the design skills up one level by forcing myself to use only scrap I had lying around the garage. While I made some compromises, the quality and functionality of the DIY table saw stand meat and exceeded the design goals.

While fully extended, the table saw stand measures 50 inches X 40. With the extension wings and the outfeed folded down, it only measures 30 inches by 21. The DIY table saw stand plans was all in my head, but I had to admit that I improvised and refreshed my original idea several times along the way. For starters, my original idea for the table saw stand was much grand than this. I had a vision of a wide cart, maybe five or six feet wide, with drawers, doors, and all kinds of design details. However, given the cost of wood as of late, there had to be a compromise. Despite not using premium materials, I am delighted with the functionality, and I intend to make a follow-up video where I will be adding additional functionality.

What is in store for the future? Well, I think that a zero-gap plate is a most. However, the blade guard insert for this table saw is somewhat unorthodox and suffers from a significant lapse in engineering. Something else that’s in order is both a half table and a full table saw sled. With such a low-quality fence as the one, this table is equipped with a sled is almost a must! Why go through all this trouble? Well, the reality is that nobody makes a table saw stand for the budget-minded woodworking guy. Yes, YET, Delta, Dewalt, and some of the top manufacturers make extension tables for their top-of-the-line table saws. Still, nobody makes one for a contractor or miny saw like the General INternationl TS 4100 like the one I have.

Let go over the design as aspects of my 𝐃𝐈𝐘 𝐓𝐚𝐛𝐥𝐞 𝐒𝐚𝐰 𝐒𝐭𝐚𝐧𝐝 Design. The wings. Adding the left and right folding wings to the table saw not only increases the workspace but allows me to cut large pieces on my tiny little contractor saw. If you know anything about woodworking, you know that the saw station is the center of the workshop. This is a place where we sand, assemble projects, glue up, and do many things we are not supposed to do on top of the table saw stand. Having your saw’s table extended from 25 to 50 inches is a big deal.
The outfeed. Having your table saw’s outfeed capabilities extended by almost two feet is also a big deal, not only from the point of view of craftsmanship but also from safety. Many kickback accidents happen when the material gets bind because of not having a long enough outfeed. While two feet is not a lot, it suffices the majority of the type of work that I do since, more often than not, I word with a quarter or half sheets of ply or MDF that I get ripped at the home center the long way.

Wheels / Caster! At least for me having the ability to move the saw out of my way is very important. Not only that, this table saw stand is small enough and light enough where I can throw it on the back of my truck and do where ever I have to.

Table saw stand storage: As I mentioned before, initially, I was thinking of doors and drawers, but at the end of the day, I decided to leave the bottom of the cart open. In the following video, I will be configuring this area to store my full table sled, my half sled, and I may also build a wedge cutting jig. Trust me when I say this area under the table saw is not going to waste.

My friend, my name is JC, and this is the Cuban Redneck DIY Channel. I thank you for watching, and I look forward to having you as a subscriber. For all of you, interest in table saw stand plans as of the release of this video, and I don’t have them available. I literally built this as I when alone, and even though it may look like a lot of work, it was not. I just worked on a bit at the time. However, you know what they say, never say never. If there are enough people interested, I may sit down on the computer and make some. As with all my videos, I intend to inspire you. The way you become a better woodworker is by making a little sketch on a napkin and building it! When the table saw stand plans become available, there will be a link on my blog at – https://cubanredneck.com