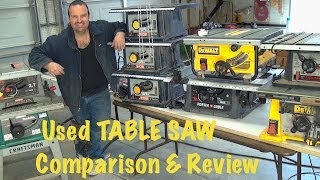 After years of use, Lets compare over 6 well used popular portable table saws. I’ll tell you which one lasted the longest & what to avoid. DeWALT, Makita, Porter Cable, Craftsman, Ryobi & more.

IMO Makita & DeWalt are well built machines.
After doing a little research turns out Porter Cable was owned by delta tools. Delta owned Porter Cable tools & in 2o11 was bought out by a taiwanese company. Now Delta is no longer made in the usa but rather over seas & porter cable imo has suffered tremendously in quality. I may pick up a few new routers & a belt sander before those turn into junk as well.
Dont waste good money on a porter cable table saw. My buddy now has 2 saws that the blade doesn’t want to lift up & down, good luck…