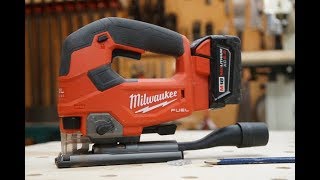 The M18 FUEL D-Handle Jig Saw is a Gen 2 upgrade from an earlier version. This new saw is brushless, has increased SPM, dust collection and an LED light.
Brushless Motor
Equipped with a brushless motor, it operates at a higher blade speed than corded jig saws. At 3500 strokes per minute [SPM] this saw is capable of cutting up to 105 linear feet of ¾” laminated particle board, that’s the equivalent to about 18 sink cut outs.
We tested this saws noise level, and measured its no-load speed at 101 Decibels.
Variable Speed
There is no variable speed dial adjustment on this saw, it does have a variable speed trigger that controls the saw from 0 to 3,500 strokes per minute. [SPM] This is a blade stroke increase from the older saw that offered 2,700 SPM.
We like that the trigger on this saw is larger and can accommodate two fingers which can reduce stress and fatigue on the user.
Not having a variable speed dial is an issue with us. Not having a variable speed requires you to operate the tool with divided attention tasks. That means you have to squeeze the variable speed trigger to the speed you desire, all while trying to make a great cut.
For precise tasks I prefer a saw that has a VS setting that lets you “set and forget,” the speed so I can pull the trigger fully, and focus on making that precise cut.
We also found that the VS trigger was not sensitive enough to get a super slow start cut, and started at a faster ramp up speed than we’d prefer.
Accuracy and Blade Deflection

I often find that a jigsaw’s quality can be summed up pretty fast if you try to cut a 45-degree bevel on a piece of 3/4″ plywood. If you can cut that bevel in a nice straight line without fighting the jigsaw than you’ve got a winning combination. This jigsaw had no problem cutting nice straight 45-degree bevel cuts over long lengths.

When the saw is in the highest orbital setting it plows through material easily – there is no wish for more power on this saw.

All jigsaws employ some sort of counterbalance system to reduce the up-and-down shaking created by the reciprocating plunger and blade.

The Milwaukee saw does have noticeable vibration, and more than the new Dewalt XR jigsaw that we just tested.

Blade Change and Blade Stroke
The front of this tool has a plastic, key-less, slide actuated, blade change that ejects the blade. This jigsaw uses all standard T-shank blades.
The saw features a 1-inch stroke length, 4-position orbital action switch to allow the jigsaw versatility when cutting different materials.
Bevel Adjustment
The keyless shoe bevel has positive detents at 0°, 15°, 30° and 45° but will also hold its position in between those settings well.
1 LED Light
The M18 FUEL D-Handle Jig Saw has one integrated LED that illuminates the work area well and stays on for 11 seconds after the trigger is released.
Cut Line Blower

An On/Off cut line blower keeps the cut line clear of debris, and allows user to turn off blower when using dust extraction.

The Milwaukee saw includes a dust cover and dust extraction tube. The saw does a reasonable good job at collecting dust in the non-orbital mode.

The M18 FUEL D-Handle Jig Saw weighs 6.4 lbs with 5.0 Ah battery and 4.8 lbs. as a bare tool. Milwaukee uses a lot of plastic parts on this saw, probably to keep the weight down, in an already BID saw. The two plastic saw parts that worry me, are the bevel lever and blade release. Time will tell how these items hold up on the jobsite.

I’m a big fan of Milwaukee tools, but this one still needs more development. It’s a definitely bulky tool even with all the plastic parts it comes in on the heavier side of what I’d like to see for a jigsaw.

The tool vibration needs to be addressed and reduced and Milwaukee should consider adding a variable speed dial to this saw.

How Much and where to Buy?

The M18 FUEL D-Handle Jig Saw sells online as a bare tool for $199.00 and kitted for $299.00. Both options come with the dust tube, shoe guard, anti-splinter guard. The kit unit comes with a 5 ah battery, charger and tool case.

The M18 FUEL D-Handle Jig Saw is a definite improvement over its earlier version, it has a ton of power, added LED and dust collection. It’s certainly an effective tool, but it’s not quite where I’d want it, to be my “go-to” saw.