Slicing wood thinner than paper with a plane bevel! So very satisfying and smooth! kezuroukai 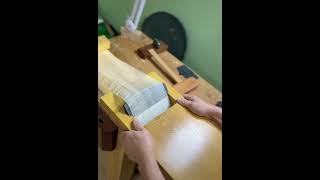 This wins comment of the decade in my opinion.

To restore wood. You only want to take the very top layer off so you can refinish.

Came here to ask the same question! Super cool, but why?

Essentially an exercise to demonstrate the quality of your tool steel, your ability to sharpen it, and your ability to finely adjust the steel perpendicular to the work surface. All of these skills are important for normal planing when making furniture, but this takes the tolerances to the finest degree.

Lmao, simple response, yet so many people are asking by

Solving the tp shortages of the future, this guy 😅

I know a woman named Sholla that slices cheese like this. Not much for words, but the best damn scout in the North.

Fun fact: this is how they made condoms back in the day!

Didn’t the Welsh use sheep intestines as condoms?

The cheese man at the deli when he becomes a lumberjack.

So that’s the device they use to make public restroom toilet paper.

When the public restroom provides paper towels that are softer then the toilet paper.

I think I remember seeing a post one time there are even competitions held for this in some places.

With the wood being this thin, could you realistically sew pieces of it together like fabric to make a ruffled collar for example. I don’t think it would make sense for a shirt , let’s say, because it would be too fragile.

This is incredible but did anyone else feel a cringe at the noise? It hit me the same way scraping a popsicle against your front teeth does and now my skin is crawling

So would this still have the razor like capabilities of paper? Or would it be softer like a fabric type substance?

Woodworker and artist here, the person is just using a wide hand plane designed for surfacing larger stock. It is made in the traditional style, although in the west we’d likely associate it with James Krenov style of fine furniture plane (which was informed by the Japanese style, soooo…..).

They person is demonstrating a technique used in Japanese kezuroukai. Basically, kezuroukai is competitive use of (typically) Japanese style woodworking tools (the efficacy of sharpening which is determined by quality of shaving). A popular aspect of these competitions is wood planing with the end goal of thinnest, widest, shaving. Basically the reason they use a wide example instead of a thin piece is it’s way fucking harder that way and Japan gonna Japan.